When people talk about surging home prices, they often think they're talking about the value of the structure itself.  But in reality, more often than not price increases are driven by land values, not home values.

John Burns Consulting, a major consultancy firm which works with builders nationwide to help them value raw land to be used in constructing subdivisions, recently released a report tracking land values in 50 major metropolitan areas of the United States dating back to 1982, 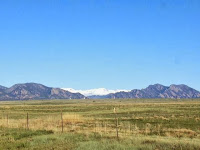 The report looked at the median home price and then used county assessor valuations to determine on a percentage basis what part of the value was attributable to the house, and how much value was derived from the land.

When land values become disproportionately high, goes the theory, there exists greater potential for a sudden and severe correction.

However, actual land value can vary widely from neighborhood to neighborhood.  Just last month, I helped a client research lot value for a small ranch home in the red hot Highlands area of Denver which sits on an 8,000 square foot lot.

By comparison, my suburban home, which was built in 2005 and also sits on an 8,000 square foot lot and would sell for about the same price as the home in the Highlands (but is nearly three times larger), has a land value of $83,130.

So land really is the big driver in determining real estate values.  For that reason, home prices will almost always be more steady and predictable on the west side of town, where there is much less available land and more established neighborhoods, than in the boom/bust areas on the east side of town such as Aurora (particularly east of E-470), Parker and Commerce City.

An educated buyer should understand that land value, not house value, is where bubbles are created.  As a percentage of overall value, land values in Denver today are more than 40% lower than they were during our peak value years, which tells me we've still got a ways to go before anyone should worry about a bubble.
Posted by Dale Becker, RE/MAX Alliance at 7:19 AM