Each year, 50% of all new real estate agents will quit the business.  And nearly two-thirds of all new agents will not renew their license at the end of their first licensing cycle.

It’s a hard business, far harder than it looks on HGTV or at a Sunday open house.  The average income for a Realtor in 2014 was $45,800 but the median was $38,747, which means 50% of licensed agents earned less than this, before expenses.  Most serious agents are working 60 or more hours a week.

It’s a business that features huge momentum swings and surprising twists.  There are big victories and demoralizing setbacks.  There is competition everywhere you look and never-ending pressure to perform.

It’s a stage that few can master, which is why NAR reports that the top 10% of agents do approximately 80% of the business.  (Your goal, obviously, is to do whatever it takes to firmly entrench yourself in that top 10%!)

A few years ago, I made the easiest $12,000 of my life.  I was holding an expensive horse property open on a Saturday afternoon.  A young couple showed up, new to the area but in love with the idea of owning some land with a view of the Rocky Mountains.

But because an elderly parent was coming with them, they had to have a main floor master, which my property did not have.  But… because I had been tracking the inventory around my listing… I knew that there was a new ranch home that had come on the market around the corner just one day earlier.  It had many of the same features… almost a half-acre of land, mountain views, zoned for horses… and so I pulled the blinds, shut down my open house for 20 minutes and took them to what turned out be the home of their dreams.

That is a home run, and it makes for a great story.  But for every home run, there is a strike out.  Or three.  Or an occasional fastball off your helmet.

A few weeks ago, I lost three listing clients in the same week.  One was an older couple looking to downsize out of a half-million dollar home they had owned for 30 years.  The second was a long-time landlord renovating a rental property.  The third was a past client looking to sell and move up.  Total value for the three homes was roughly $1.4 million.  All three sellers were loyal and firmly committed to me.

And then, with three phone calls two days apart, all three sellers froze up.  One was dealing with job uncertainty, one lost her nerve over finding a suitable replacement home, and one decided to refinance, pull cash out and hold on to the house.

The world doesn’t care about your sob stories, and you can’t dwell on what goes wrong.  All you can do is pick yourself up, immediately, and get on to another productive task.

But defeat is hard to process and it can hang on you like a millstone, if you let it.  It’s been said that if you can’t handle failure, you won’t know success.

Paper cuts are part of the business, as are sleepless nights and occasional wipeouts.  So are triumphant paydays and the periodic serendipity of being in the right place at the right time.

Since the beginning of 2012, home values in Denver (just the city, not the metro) have increased by a mind-numbing $18 million per day.

That’s $18 million per day, every day, for roughly 1,200 consecutive days.  Add it all up, and that’s $23 billion in freshly-minted equity just in the city of Denver.

I have never seen anything like it.  In 21 years as a broker, including the high-flying subprime days back in Southern California in the early 2000s, I’ve never seen the economic landscape of a place change so fast or so dramatically.  (You see the manifestation of this everyday between 7 - 9 a.m. and 3 - 6 p.m. on I-25, among other places) 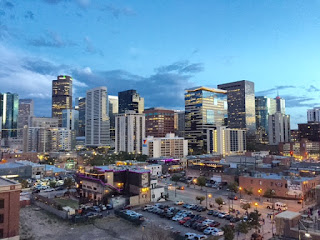 It’s safe to say that, right now, this city is literally floating on an ocean of cash.

So you’ve got an awful lot of people today who are feeling pretty good about things, flush with equity with nothing but good vibes about the housing market.

Which is kind of dangerous.

That’s not how many people are looking at it right now.

Twelve years ago, I remember going to a coaching seminar where a well-known, prominent real estate personality in Southern California told me “People say that in Orange County, you need a second job to afford a home.  But the truth is, owning a home in Orange County is like having a second job.”

That was fatally-flawed thinking, yet many people fell for it.

Greed is a powerful emotion, and it’s being felt like on both sides of our market right now.  Sellers want the cash, and many buyers want a piece of the action.

But the problem is, people suddenly seem to have selective amnesia about the housing market and they are basing their decisions solely off what’s happened over the past 36 months.

Houses make generational price shifts like this only one every 20 or 30 years.  Usually when some radical variable is injected into the market, like a major employer moving into town, a significant change in the tax laws or (in our case) the Federal Reserve printing money with reckless abandon for five years, then loaning it out at 60-year lows.

Think about this… in 1944, when the VA first began making 30 year home loans, the initial interest rate on a mortgage was 3.5%.  Today, 71 years later, rates are barely above this initial launch point, in a market where home prices have increased 30% - 50% since the Federal Reserve fired up the printing presses in 2009.

Does that sound fishy to you?

Truth is, the government benefits a lot from a hot housing market.  There’s property tax revenue, there’s the wealth effect (creating equity so that people will spend more, generating more jobs and tax dollars) and there’s the overall job security that befriends politicians when the economy is doing well.

There is innovation in our economy, and technology has created new markets and amazing new growth opportunities.  But on the other side, millions of jobs have been lost, destroyed or outsourced to workers in other countries.

We are moving into an 80/20 world, where most people will scrap to get by while a much smaller group leverages education, technology and cheap money from the Federal Reserve to soar to new economic heights.

In five to 10 years, we’ll look back and know if this extended season of low rates did more harm than good.

I am of the belief that the Fed’s drastic intervention in 2008-09 was warranted and necessary, but low rates became a comfortable drug-of-choice as artificially low borrowing rates started spinning off more and more economic benefit.

The bottom line is that since the Great Recession, those with access to assets and credit have made a killing, while those without them have fallen further and further behind.

There’s a recklessness in the market right now that concerns me, because too many people are walking around feeling like shrewd investors, when in reality many of them just had good timing.  In a hot market, everyone’s a genius.

I’m not telling people to get out of the market (yet) or refrain from buying.  But I am telling people to slow down, evaluate things carefully, and get their emotions under control.  We’ve been in frenzy mode for three years, and it’s going to look different in the future.  Your decisions need to be reasoned and sustainable, not just an emotional byproduct of playing with house money.
Posted by Dale Becker, RE/MAX Alliance at 6:11 AM