MILLENNIALS AND THE COMING GENERATIONAL CONFLICT OVER HOME OWNERSHIP

I've been giving a lot of thought lately to the future of home ownership.

That sounds like a weighty philosophical statement, and it is, but when your business is based on transparency, honesty and thoughtful analysis of the numbers... you can't avoid looking at how societal and political trends will impact housing in the coming years.

As you know if you've been following my narratives, either in this space or on Facebook or via the recent comprehensive 10 - 15 page market update reports I mailed out to past clients in September and again in January, our market is changing.

Here in Denver, we're on the tail end of multiple offer bidding wars, inventory shortages and what has essentially been one of the all-time great market runs for the Rocky Mountain region. 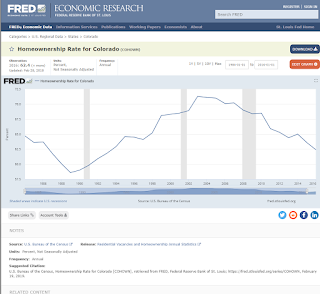 The main reason our market is starting is to flatten out is that young people are simply tapped out.

Years of rising prices, coupled more recently with rising interest rates, have made home ownership unattainable for a growing number of younger Coloradans.

It's reflected in the home ownership rate, which has dropped from an all-time high of 71% in Denver 12 years ago to 62% today, and I believe it's headed for the mid 50's over the next few years as the American Dream of buying a home simply becomes a dream, period.

It's too difficult for young people to get started now, with record amounts of college debt, a scarcity of good paying jobs and technology and globalization increasingly putting Millennials in direct competition with educated young people in India, China and a host of other countries where $5 an hour is a pretty attractive wage.

For decades in this country, tax policy and governance has been skewed in favor of the rich and the old.  And more recently, the Fed's interest rates policies allowed corporations access to unlimited capital at negligible rates, leveraging their returns and creating even more wealth at the top of the pyramid.

Change happens slowly, but change is gathering momentum.  And it's going to affect housing.

For example, what happens if (when) the home ownership numbers dip below 50%, and we effectively become a nation of renters.  At what point do things like the mortgage interest deduction and tax-free capital gains for sellers of primary residences go away?

Don't say that housing in this country isn't subsidized by tax policy, because it is.

For all the stupid and ineffective things NAR does with its ridiculous piles of dues-generated cash, the one thing they have done effectively is lobby.  Yes, NAR has 1.2 million members writing annual checks to fund a war chest that directed over $72 million to lobbyists and politicians in 2018.  And that fat cat system has been the first line of defense in holding the status quo.

But if the trendlines in our political culture mean anything these days, it's that the status quo is in the crosshairs.

We have a housing affordability problem in this country, in part because a whole bunch of older people are sitting on trillions of dollars of equity that was created in large part through government subsidized housing perks and a very accommodating interest rate environment manufactured by the Federal Reserve that created an unbelievable post-Great Recession value surge.

For Millennials, what did they get?  $20 trillion in debt, record student loan liabilities, rising rents, and a job market that is marked by diminishing opportunity and increased pressures caused by the twin hammers of technology and globalization.

It's not far-fetched at all that a younger, more mobilized political class would extract its revenge by taking aim at the home mortgage interest deduction.  And if a majority of the population ends up as renters, then it's a lot easier to start passing mill levy increases on those privileged snobs who own stuff to pay for public schools, roads and infrastructure.

And maybe appliance tax credits, or transportation tax credits, or utility bill tax credits... or whatever other credits, gifts or incentives politicians can dream up to funnel toward the growing bloc of voters known as renter nation.

While we have vulnerabilities here, it's far worse in my old home state of California, where Proposition 13 has been the untouchable third rail of politics since 1978.  This voter-passed initiative was intended to keep older Californians from being priced/taxed out of their homes by limiting annual property tax increases to 1%... which means a home that sold in 1980 for $50,000 may be worth $800,000 today, but if the owner has been there for 39 years he is taxed as if its actual value is less than $100,000.

Guess who makes up for that funding shortfall?

The younger guy who pays $800,000 for the home next door, who is taxed at eight times the rate of his elderly neighbor, that's who.

If there's an affordability crisis and you want to blow up the system in a hurry, repeal Proposition 13, and overnight you'll have every senior citizen on a fixed income in the state putting their home up for sale and moving to (insert the name of any more affordable place here).

Which means massive amounts of inventory flooding the market overnight, plunging prices due to the surging supply, and complete chaos in the housing market.  (That might work pretty well for young people, come to think of it)

That's the California example.  We have a senior property tax exemption here in Colorado, and although it's not nearly as punitive as the system in California, some revenue-hungry politicians might be inclined to look at it.

My point is, over the next decade we are going to live through a politicized generational revolution both here in Colorado and in the United States in general, in my opinion.  As young voters mobilize and politicians pander to them, it will change the game.

The fastest way to level the playing field between rich and poor, old and young, owners and renters... is to start taking the perks of ownership away from the have's and transferring them to the have not's.

Based on this framework of ideas, you would be naive not to at least consider the possibility that home ownership may soon become a politicized target, instead of a generational aspiration.

We've got a broken system here.  Well, it's broken if you're young and not endowed with a trust fund or a pipeline to the Bank of Mom and Dad.

If we don't lead on this issue, politicians will.  We can lead, or we can be led.  But either way, don't expect the the world of tomorrow to look like the world of today.
Posted by Dale Becker, RE/MAX Alliance at 2:25 PM