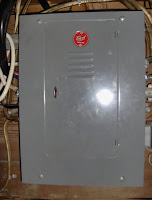 Ran into yet another situation this week where we found a Federal Pacific Electric Panel in a 1950s Denver area ranch home.  There are literally thousands of these panels installed through the metro area, and they are as common as ungrounded outlets or single paned windows in older homes.
So what's the big deal?  Federal Pacific, along with a company called Zinsco, was literally sued out of existence in the 1980s because of reports of repeated failure and fires stemming from these panels.
Among the chief concerns:
• Some FPE breakers fail to shut off internally even if the toggle is switched to "off"

• Breakers fail to trip during testing up to 60% of the time
• Electricity arcs between buss bars and breaker contacts causing hot spots and fires inside panels.
• All FPE panels are old (most way beyond expected service life). Even the best equipment fails with time.
• The Federal Pacific Company doesn't exist anymore so all retrofitted FPE equipment is manufactured by an after market in Canada or China.


Inspectors and electricians will routinely and "automatically" recommend replacement of FPE and Zinsco panels, because the liability in not doing so would simply be too great.  However, it should be noted that there are upwards of 10 million FPE and Zinsco panels still being used in the United States, and there are literally millions of homeowners who live with these panels on a day to day basis without a problem.
Should you have an FPE or Zinsco panel replaced?  If I am listing a home and I see one, I let my seller know up front there is a high probability that the buyer is going to ask for its replacement.  Often, I will recommend replacement as part of our listing strategy, because we can then both add the cost of the new panel to the list price and market the fact the home has a new panel.  That strategy takes a liability and converts it to an asset.
For my buyers, I identify FPE and Zinsco panels and let them know that the inspector is going to call it out.  We'll normally have an electrician come out and take a closer look to see if there is obvious evidence of trouble, and then design a plan from there.
The quality of your experience in buying or selling a home depends on the quality of the information and counsel you receive.  FPE and Zinsco panels are important considerations for buyers and sellers alike, and it is in your interest to know early on when a problem might arise.
Posted by Dale Becker, RE/MAX Alliance at 3:27 PM