There's a palpable chill that has fallen over the Denver market in recent weeks, and nowhere is it more apparent than in the surging number of active listings. 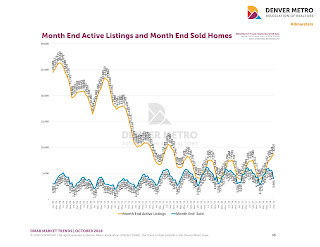 Since last fall, interest rates have spiked from the high 3's to the low 5's, sending shockwaves through the market and pricing many buyers out entirely, especially at the entry level.

The surge in rates is likely a result of the tax bill passed last December, which created record corporate profits and drove expectations for the economy higher.  With the DJIA north of 25,000 and US unemployment at a generational low of 3.7%, making 30-year financing commitments in the 3's no longer makes sense in the financial markets... hence, a new era of significantly higher rates.

Hardest hit by the increase in mortgage rates are high cost markets.  On a $400,000 loan, the 1.5% jump in rates over the past 12 months increases the initial monthly payment on a fixed-rate loan by more than $350.  That's significant, and it's taken the starch out of our market.

Here's a look at how active listing inventory has fared nationally on a year-over-year basis versus locally here in Denver since spring:


It's clear that higher cost markets are feeling the greatest impact.  In California, which has a median price nearing $600,000, active listing inventory in September was up 20.4% from one year earlier after starting the year down 12%, a trendline very similar to what we have seen here in Denver.

The fact of the matter is that higher interest rates are deflating the market, and what has been manifesting as higher prices in the past is now being absorbed by significantly higher mortgage payments while more and more buyers are simply tapping out.

The only path back to growth like we've seen in the past is rates that look like what we've had in the past, and the odds of that kind of sudden rate reversal are remote.

In the span of a few short months, buyers have pulled back and the market has lost its punch.  Buyers who have spent the last several years frantically chasing after something, anything in order to get on the right side of an appreciating market have suddenly become a whole lot choosier, demanding good condition, reasonable pricing and value supported by relevant comps in exchange for having to make monthly payments that are now hundreds of dollars higher.

For sellers, we're at a crossroads.  Get in line with current realities, or cover your eyes and pretend it's still the low-rate market of six months ago.  Sellers who choose to live in the past will quickly find, however, that the market they are dreaming of no longer exists.
Posted by Dale Becker, RE/MAX Alliance at 4:07 PM