Seasonality is a fact of life in the Colorado real estate market, with inventory peaking every August or September and then cratering to a low point in January or February. 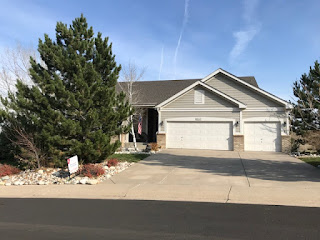 A look at the latest market statistics confirms that it's business as usual in the Denver metro real estate market.  The inventory of active listings fell 16.2% from September to October, dropping from 7,546 to 6,325.

While the decline in inventory from September to October is normal, a more accurate way to assess the market is to view statistics on a year-over-year basis.  In that regard, the inventory of homes for sale plunged by more than 17%, from 7,676 one year ago to 6,325 today.

That is the biggest aggregate year-over-year drop since June of 2015, when the inventory of homes fell by nearly 21%.  But even more telling is that this represents the fewest number of homes for sale at the end of October since the Denver MLS was formed in 1985!

What does this mean?

With supply falling at a faster than normal clip, the logical conclusion is that the market is going to be even more starved for inventory than it usually is to start 2018... which means another season of bidding wars and buyer frustration is on the horizon. 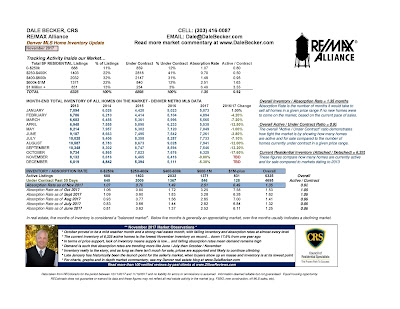 The absorption rate fell from 1.53 months in September to 1.35 months in October, evidence that homes were selling at an even faster pace in October than they did in September.

The hottest sector of the market remains the $250k-$400k bracket, where the absorption rate dropped all the way to 0.70 months.  This means with no new inventory, every home on the market would be sold in about 21 days.

Nationally, the absorption rate for homes is just shy of 4.00 months.

Like a doctor tracking vital signs, I track the monthly numbers closely to assess the overall health and directional trends of the Denver market.  As 2017 wraps up, the market is even tighter today than it was a year ago, suggesting that the 7.2% appreciation rate we've seen over the past 12 months is not an unrealistic projection for the coming year as well.
Posted by Dale Becker, RE/MAX Alliance at 6:19 AM