SHOCK TO THE SYSTEM

Last week’s election of Donald Trump as 45th President of the United States caught much of the country by surprise.  The bond market also failed to see it coming, and as a result, Wall Street is recalibrating quickly based on expectations of fewer regulations, tax cuts and higher interest rates. 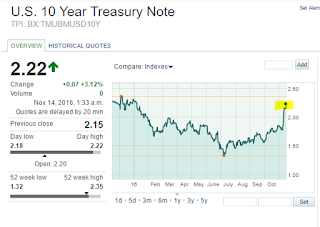 The impact on the housing market is potentially unsettling.

In just seven days, the 10-year T-Bill has leaped by nearly 50 basis points, which equates to a .50% increase in 30-year mortgage rates.  For a $400,000 purchase with a 20% down payment, that equals a monthly payment that is suddenly almost $100 higher in just seven days.

Put another way, over 30 years your interest costs just increased by more than $33,000.

This is a very significant development, especially in a high-cost market like Denver, which is already struggling with unprecedented affordability issues.

Much of the anxiety reflected in the bond market is based on Trump’s promises to repeal or amend Obamacare and get American workers back to full employment.  All politics aside, one key consequence of Obamacare's employer mandates to provide coverage for those working more than 30 hours a week is that millions of American workers are now chronically underemployed.

Major corporations like Home Depot and Target have reduced hours in order to dump employees onto Obamacare exchanges, while other companies have simply increased overtime and wages for existing employees while staying away from adding new full-time labor.

As such, economic growth in much of the country (with Denver a notable exception) has been stagnant, and that has allowed the Federal Reserve to justify keeping rates at historically-unprecedented lows.

This is part of the angst that fueled the Trump movement, and if Obamacare mandates are overturned and employers once again begin hiring full-time help, that growth is perceived as inflationary.  Add to that the prospects for lower taxes and fewer regulations, and the groundwork is already in place for much more explosive economic growth than the country has experienced in recent years.

Of course, economics (like politics) is complicated business and we can have long debates about the merits, truths and consequences of different policies.  But this is why the market is suddenly freaking out – no one knows for sure what the landscape will look like in 12 months.

The immediate impact is higher rates, and that’s bad news for housing.  Long term, I’m still resolutely optimistic for the Denver market, because we offer employers a diverse, well-educated, youthful workforce that is equipped for our evolving economy.

Posted by Dale Becker, RE/MAX Alliance at 6:39 AM