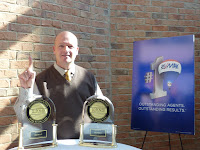 The 2011 JD Powers and Associates survey of consumer satisfaction for real estate companies and the findings are not surprising:  RE/MAX is number one among both home buyers and home sellers!
This post is not merely an attempt to “pump up the brand”. The fact that RE/MAX was ranked number one is because the entire RE/MAX model is based on recruiting and retaining the most productive agents in the industry by allowing them to keep more of their commissions… while charging a fixed monthly "pay to play" fee structure that simply will not work unless you are selling a large number of homes.
Recognition by JD Powers comes at a price. Although JD Powers has conducted surveys since 1968 recognizing top performers in a variety of industries, the licensing fee to use the JD Powers trademark and logo for commercial purposes starts at $275,000 per year. Because RE/MAX was honored for top performance with both home buyers and home sellers (two different categories), RE/MAX will pay $550,000 to fully promote its JD Powers ranking in the coming year.

That explains why you only see a few select companies – like Honda Automotive, for example – broadly using JD Powers recognition in television and print.
I recently attended a RE/MAX event in Denver where company founder and CEO Dave Liniger challenged every RE/MAX agent to embrace the award and what it represents.

As many of you know, I moved to RE/MAX five years ago because I wanted to be associated with the most powerful, professional and productive brand in real estate.  The JD Powers recognition affirms once again that RE/MAX is the most trusted brand in real estate.
Posted by Dale Becker, RE/MAX Alliance at 4:36 AM