Earlier this week, I traveled to Dallas for the 2016 RE/MAX Ultimate Teams Event. 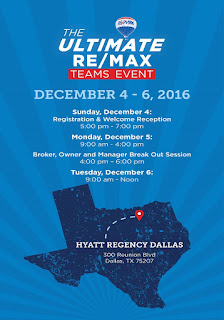 This two-day program attracted nearly 600 team leaders or aspiring team leaders from RE/MAX offices in the US and Canada.  The demographics of the group were extremely impressive, as attendees averaged 17 years in the business and average 2016 income of over $280,000.

In short, these were the best and most successful agents in the RE/MAX system.

RE/MAX has been slow to support teams, quite candidly, because the formation of teams usurps power and revenue from the RE/MAX corporate model, which has long been focused on attracting successful, experienced, and entrepreneurial top-producing single agents.

Consolidating the production of multiple agents under the banner of a single team leader threatens a business model that is largely dependent on individual agents each paying monthly fees to be a part of the brand.  But to their credit, RE/MAX International has finally recognized that team-building is not only here to stay, but long-term it’s going to be the only sustainable model in real estate.

With technology creating a 24/7 marketplace, it’s increasingly difficult for single agents to keep up with the demands of a 24/7 real estate business cycle.  The best long-term answer is to create a structure that supports constant availability and provides exceptional service at all times.

Much of the two-day event was like drinking from a firehose.  Power panels featuring top-producing team leaders, financial experts preaching the importance of strict budgetary discipline and an intensive three-hour seminar on Tuesday with Brian Buffini, whose referral-driven real estate sales model has been at the center of my success and whose globally-renowned coaching organization works with many of the top agents in the world.

“You don’t form a team for leverage,” Buffini told the crowd.  “It’s not so you can have more time at home, or even so you can work fewer hours.  The only acceptable reason to form a team is when you consistently have a surplus of leads that you yourself cannot handle.”

The most important hire is the first, because your personal assistant will either provide the structure and support to grow or keep the entire enterprise from getting off the ground.

“Hire a fit, not a friend”, Buffini said. 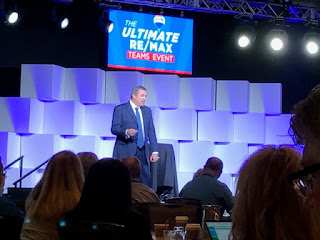 The three hiring filters for that personal admin (in order) are character, competence and chemistry.

“You need all three for a successful hire", Buffini continued, “but in the end, character wins out.  Competence can be learned, but character is innate, and without it nothing else matters.”

“Management is telling people what to do, “Buffini said.  “Leadership is doing the right thing, regardless of circumstance.  Leaders must lead, or they will eventually lose their teams.”

The goal of any successful team leader should be to help each team member reach his or her goals.  If those goals don’t align with the success of the team, then the hire was a mistake from the beginning.

Most highly successful agents and team leaders are control freaks, and I certainly can relate to that.  But Buffini said that unless control freaks learn to grow and delegate, they rarely build successful teams.

“You've got to be broken of your controlling ways," Buffini explained.  "The cure to being a control freak is constant feedback.  You must have the humility to seek out feedback, internalize what you hear, and proactively empower those on your team.  Even if that means allowing them to make mistakes so they can grow.”

Buffini cautioned that for 90% of team leaders, there is no annual four week beach vacation.  There is no endless flow of passive income.  Being a team leader is about creating opportunity for others to succeed and building an enduring, trusted brand.  Only after years and years of hard work can a successful team leader look at easing out of the sales equation and handing the reigns off to a team of subordinates.

Ultimately, being a team leader means that the buck stops with you, always.

The theory of “black swan events” is a metaphor that describes hard-to-predict events which result in a shock to the system and disruption of the status quo.  These unforeseen events often result in immediate shocks to markets, political structures or societal norms.

In real estate, a black swan event happens when a home sells well above or well below the established range of values for a neighborhood.  Sometimes there’s a good reason for the range-breaking sale… and sometimes there is not.  I call these “black swan comps”.

I recently listed and sold a gorgeous, impeccably-updated newer home at an all-time high price for its neighborhood… a black swan comp since it closed $24,000 higher than any other previously closed sale and more than $70,000 above a similar square footage home which sold across the street only a few weeks earlier.

From the beginning, as my sellers and I discussed strategy and how to competitively price the home, our number one topic of concern was with the appraisal.  I made it clear that getting this home to appraise for a financed buyer anywhere near our listed price was going to be a significant challenge, and that the appraisal was going to be moment of truth inside this transaction.

Unless… we could find a cash buyer, in which case we might be able to sidestep an appraisal altogether.

Most appraisers are cautious by nature, especially in a rapidly-appreciating market, and so even though this home had remarkable updates, including reclaimed wood flooring, custom kitchen and bath remodels and extensive landscaping improvements… persuading an appraiser to push up so far above other closed sales in the area was no sure bet.

Things rarely go as planned in real estate, but in this case, we caught lightning in a bottle… and found a full-price cash buyer the first weekend we were on the market.

It’s unlikely that another home is going to sell above this number any time soon, because quite simply, I don’t think there’s another home in the neighborhood so fully and beautifully upgraded.  And so the closed price on this home is now a data point with a limited shelf life - probably six months, which is about as far back as most appraisers will go in searching for area comps.

It’s entirely possible that the inclusion of this black swan comp will add $15,000 - $25,000 to the value of other homes in the neighborhood…. but only for as long as this home sticks on the grid as a recently closed comp.

Which is why it’s important for brokers to exercise supreme diligence when sifting through recent sales in a neighborhood.

When a great home sells for a record price, there’s a window of opportunity for everyone else to “leverage up” off the value of that closed sale.  And so an experienced listing agent will call this to the attention of potential sellers so that they do not miss the opportunity.  It might mean pushing things forward and listing a home a few weeks earlier than planned, but if it adds five figures to the market value, it may well be worth it.

Six years ago, we saw the opposite effect… when one distressed short sale or bank-owned home would undercut the value of other area homes by thousands of dollars.  Smart buyer agents would try to leverage down off this negative black swan pricing for as long as the home stuck on the grid of recent sales, while listing agents pulled their hair out trying to wish away the bad comp.

The bottom line is that timing, strategy and market knowledge count for a lot in real estate.  There are single, short-term events that can temporarily add or shave tens of thousands of dollars to or from the value of homes in a neighborhood.

Good agents can identify these black swan events and use them to the benefit of their clients.  Less experienced agents often miss them (or willfully ignore them), and as a result, cost their clients a lot of money.
Posted by Dale Becker, RE/MAX Alliance at 6:25 AM