If you are attempting to evaluate the worth of a Major League shortstop, there is publicly available data that will give you some indication of what kind of player you are looking at.

For example, if you compare the lifetime statistics for Derek Jeter and Troy Tulowitzki, you’ll see something like this:

From these numbers, you can have a legitimate discussion about which player has performed better during the course of his career, which player has more upside, and whether one would be a smarter pick than the other if you were starting up your own Major League Baseball franchise. In real estate, there is no such tool for comparison.

In large part, this is because Realtors themselves do not want you to know how much (or how little) they sell, where it’s located, and what it cost.

I have argued against this line of thinking for years… of course, that’s because my production puts me in the top 10% of agents, which means 90% of the agent population is automatically not going to like my numbers (or theirs) being public.

But this is wrong.  It’s easy to argue that the decision about whom to hire to help you buy or sell your life’s most important investment is far, far more important than whether Derek Jeter or Troy Tulowitzki is the better shortstop… but the consumer will never know a fraction of what’s readily available about Major League shortstops when it comes to choosing a real estate practitioner.

One year ago, a company called Redfin made a bold play when they decided to independently mine regional MLS systems for agent production data and publish the results.  That data, posted on their website under the header “Redfin Agent Scouting Reports”, caused an immediate panic in the industry. Within three days, under intense pressure from its membership, most MLS systems either terminated access to Redfin altogether or promised to do so if the Agent Scorecard function wasn't shut down at once.

Threatened with an immediate loss of access to its most prized commodity - MLS property listings - Redfin backed down.  Agent Scorecard quickly vanished and individual agent sales data went back under cover of darkness once again.

So what can a consumer do to when it comes to finding a qualified, competent agent?

Word-of-mouth referrals have always been a good, if unscientific, way to screen agents.  Advertising and neighborhood presence can also be used as benchmarks… but none of these really allow you to peek behind the curtain, to see what others have experienced.

Later this week I’ll let you know how I’m trying to address this issue, at least as far as my production data is concerned.  Check back Friday for that post.
Posted by Dale Becker, RE/MAX Alliance at 3:50 PM

Each month, those of us who follow real estate see an avalanche of statistics and reports assessing what happened over the previous 30 days.  With coverage in the Denver Post, the Denver Business Journal and countless other blogs and publications, it’s relatively easy for consumers to be confused if they don’t understand the numbers.


One of the biggest points of confusion has to do with the “average” sales price versus the “median” sales price.

Take a look at these figures from the Denver MLS for September:

WHICH METHOD IS MORE ACCURATE?
While it can be debated, many consider the median sales price to be a better indicator of the market.  This is because the average sales price tends to be skewed by outliers, usually multimillion dollar properties.  Look at this example below:

The median price does a better job of showing you what’s happening for most buyers, because it tracks which way the middle of the market is trending.  Therefore, I consider it to be more statistically accurate.

Nothing “average” about that!
Posted by Dale Becker, RE/MAX Alliance at 1:13 PM

For 18 years, I have been in the business of real estate.  It can be a hard life at times, an emotional grind, and it’s one that requires discipline, resiliency, commitment, and then more discipline.

Why is today New Year’s Day?  Because the actions you take today will determine what your income looks like 90 days from now. 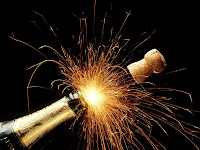 Many agents succumb to the “seasonality” mentality when it comes to real estate.  “Oh, there’s no business in the fourth quarter”, they say.  Or, “I’ve already worked my tail off for nine months, I’m taking a break.”

That thinking is fatal.

Because you are always 60 to 90 days from your next paycheck in this business, if you planned on shutting it down in the fourth quarter, then you should have started packing things up July 1.  If you quit now, and don’t seriously restart your marketing until January, you may well go six months without a paycheck.  That’s called vocational suicide, you fool!

An excellent mentor and former manager with my Century 21 franchise in Southern California taught me the concept of New Year’s Day on October 1 nearly a decade ago.  I’ve used this line of thinking ever since.

The fourth quarter is the time to finish the year strong, not rest on your laurels.  When else during the year does 25% of your competition mysteriously disappear?  When else can you so easily and clearly stand out above your competition?  When else are the odds for success tilted so steeply in your favor?

It’s October 1, New Year’s Day in real estate.  Raise your glass and give thanks for 2012, the year prices turned around, buyers lost their fear and Denver became recognized nationally for what it is - one of the best real estate markets (and places to live) in the country.  May 2013 be your best year ever!
Posted by Dale Becker, RE/MAX Alliance at 7:58 AM