Last Sunday, the national edition of Barron’s featured a recovery-themed front page article ranking its top 50 housing markets in the United States.  Based on income, unemployment, job growth, demographics and housing permit activity, Barron’s ranked Denver #4 on that list, projecting that values in our area will increase a whopping 16% over the next 36 months.

While I am often leery of generalized market assessments (the lower end of the market, for example, has outperformed the high end of the market during our recovery and will continue to do so for the foreseeable future), let’s just assume that their three year prediction of 16% appreciation is accurate for a $200,000 home.

Here’s what that means, in real numbers:

If Barron’s projections are accurate, housing costs (under this example) could increase by as much as 47% on a $200,000 home over the next 36 months.

Even if you tempered Barron’s assessment, scaling back the appreciation to 10% and basing your payment upon a 30-year FHA fixed rate of 4.5% (which is an optimistic view of where rates will be in 36 months), your monthly payment would be $1,094.52, which is still 24% higher than it is today. 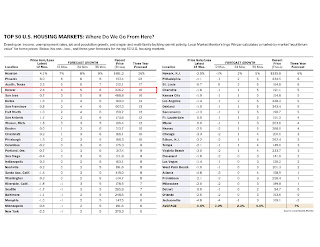 The bottom line is we are operating in a window of time where rates and payments have never been lower, and the upside for buyers has rarely been higher.

Just twenty months ago, distressed homes (foreclosures and short sales) made up 45% of the Denver market.  Today, less than 10% of the listings on the market are short sales and foreclosures.

There’s no more distressed inventory, hardly anything is for sale, buyers are everywhere and rates are below 4.00%.  What do you think that means for prices going forward?

The factors which created downward pressure on prices for five years have reversed.  This is a market garnering national attention for its upside, with interest rates at record lows, and affordability at an all-time high.

It’s not the time to quibble over pennies.  It’s the time to find a house, write a solid contract and set yourself up for the next 10 years.
Posted by Dale Becker, RE/MAX Alliance at 9:20 AM

“Learn your craft well enough to teach it.”
– Sun Tzu, “The Art of War”


One of the reasons I have written this blog for the past six years is that it forces me to really think about my craft.  There is a difference between “peripheral” knowledge and “actual” knowledge.

Peripheral knowledge is an awareness that the market has improved over the past 12 months.

One of my mentors, the late Jim Rohn, often taught in his seminars that if you were given the opportunity to teach a class, you should take it.  I have acted on that advice repeatedly through the years.  At my old brokerage in California, I taught classes regularly on lead generation, database management and technology skills.

When I relocated to Colorado, I immediately put together a “Mastermind” group of fellow agents who met weekly to brainstorm and share ideas.  And for several years I’ve been consistently involved with many different networking groups, taking a leadership role and giving presentations wherever and whenever the opportunity arises.

If you’re going to get up before a group of people, whether it’s for 10 minutes, 45 minutes or 3 hours, you have to prepare.  And preparation means “knowing your stuff”.

It’s easier just to show up.  It’s easier simply to tell clients that the market is “better”, and hope that your simplistic answer will suffice.

But I think excellence is found in the details, and that by taking time to force yourself into a place of actual knowledge and competence, you become far more worthy of trust and confidence.
Posted by Dale Becker, RE/MAX Alliance at 5:38 AM

I was going through some old files over Labor Day weekend when I found a copy of a letter I sent to many of my clients just about one year ago.

That letter, which was actually a three page discussion about the significant changes taking shape in the market last fall, was entitled "UNDERSTANDING A CHANGING MARKET."

Today, nearly 12 months later, I thought it would be worthwhile to revisit some of those comments I made last year and provide some updates with what is happening now, as the “Denver Recovery” remains the focus of much discussion around the country today.

So what’s happening with demand?

Last month, there were 4,181 homes that went under contract, up 19% from the 3,386 that went under contract during the same period one year ago.  The number of contracts written last month increased at every price point, including a strong surge in the $250,000 to $400,000 price range, which is great news for a segment of the market that has really just been treading water for the past few years.

Below $250,000 (undeniably the hottest sector of the market), there are just 3,115 homes for sale, compared to 5,875 at this time last year.  That is a 47% drop in inventory in the most sought-after price range!  Contracts here are up 14% from a year ago, although I am confident that the increase would be even higher if there were simply more desirable homes on the market.

As I said last year, the decline in inventory is basically attributable to two factors.

First, foreclosures are down roughly 75% from Colorado’s worst year, 2007,  In the Denver metro area, we are on track for about 8,000 completed foreclosures this year, a huge decline from the 27,000 we had just five years ago.

Second, our economy is functional, but hardly robust.  Historically speaking, first-time buyers make up about 40% of the market.  So-called move up buyers make up the next 40%, with the remaining 20% consisting of downsizers and investors.

In analyzing the numbers, we have plenty of first-time buyers and lots of people trying to downsize, plus a large contingent of investors who are picking off rental properties with once-in-a-lifetime cash flow potential.  The missing link remains clear – the move-up market remains far, far below historical levels.

What does this mean?

In short, it means the homeowner in a $250,000 home who normally would sell to buy one for $375,000… isn’t selling.  He has neither the equity (yet) or the confidence in the economy to take on such a move, and so he stays where he is.

That lack of entry-level inventory, coupled with the disappearance of foreclosures (80% of which affected homes priced below $250,000), explains why there is hardly anything for sale.

Short sales and foreclosures, which made up 45% of the inventory in the Denver MLS in January of 2011, are just 14% of our inventory today.  Distressed inventory, which undermined prices and destroyed neighborhoods, has pretty much vanished.

That is great news for homeowners, neighborhoods and prices.

One last figure I track closely is what is known as the “Active to Under Contract” ratio.  In short, this ratio shows how many homes are on the market and still looking for a buyer compared to each one currently under contract.

Economists will tell you that a 2 to 1 ratio (2.00) is healthy.  This would mean there are approximately 2 homes for sale to each one under contract.

The one-year change in the ratios speaks for itself:

You can clearly see how tight the market is today below $400,000… how it softens up to $600,000… and then how it breaks down after that.  Still better than a year ago, but the obvious takeaway is the dramatic shortage of inventory below $400,000.
Posted by Dale Becker, RE/MAX Alliance at 4:28 PM