BUYERS HAVE LOST THEIR FEAR

Last week I lost out in a multiple offer situation on a home in Littleton that was listed for six months in 2011 at $205,000, without any takers.  It was relisted for $200,000 on April 14 and went under contract, above list price, four days later, with multiple offers.

The Littleton home didn’t magically change.  It didn’t get new windows, new carpet or a new roof.  No one added new landscaping or fresh paint.  The only thing that changed was the market.

And that’s the big difference in 2012.  Whereas buyers for the past five years have often chosen to deliberate, buyers in 2012 are taking decisive action.  At least the buyers who are actually putting homes under contract, that is. 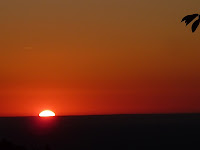 When working with buyers, it is increasingly important to make sure your clients understand the dramatic shift that has taken place since last summer.  The way buyers shopped for a home in 2011 is not the way they are shopping for homes in 2012.

Lowballing is out.  Highest and best offers are in.  Deliberation is out.  Decisiveness is in.  Fear is out.  Confidence is in.

A percentage of the market is still working under an expired paradigm.  And that’s okay, to start.  It's hard to change your thinking, when defensive, fear-based attitudes about housing have been the norm since 2007.

If you are purchasing something as important as a home, you must have confidence about what you are doing.  But after writing two, three, four, five failed offers… many buyers eventually figure it out.  The home buying landscape is different in 2012.

I have used the analogy repeatedly that the housing market of the past five years has been like a sick, bedridden patient.  Foreclosures and short sales have been like a serious illness that kept the patient fevered and motionless.

But distressed homes now make up just 18% of the market, down from 45% of the market 18 months ago.  You can’t foreclose on homes forever, and truth is, since 2008 the quality of home buyer has improved dramatically because of far stricter underwriting guidelines. Most neighborhoods have stabilized, with the exception of the very high end of the market.  Values in many parts of town are (what's that word?) appreciating.

The night is almost over.  Dawn is breaking on the Denver housing market.  After five long years, daylight is coming up over the horizon.
Posted by Dale Becker, RE/MAX Alliance at 5:40 AM

GOODBYE TO THE LOGICAL MARKET

I’ve finally come to terms with it.  The logical market is gone. 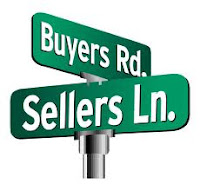 Let me explain.
If you are someone whose thoughts are dominated by logic… if you are someone who uses deep, thoughtful analysis and caution when preparing an offer… if you are intent on paying less than the last guy who bought a home down the street… you have missed this market.
It doesn't mean you're a bad person.  I'm just like you.  I am a "high logic" thinker, and if you have ever sat down with me and I didn't (at some point) break out a spreadsheet, consider yourself lucky.
But logic and deliberation are slow, and this market is fast.  During the first quarter of 2012, I have written more than a dozen "failed offers", most often the result of using painstaking analysis of past sales and historical trends.  The people who are actually getting homes under contract are thinking about tomorrow, not yesterday.
Inventory is down 42% market wide from a year ago, and the number of homes under contract is up 32% from a year ago.  Buyers are everywhere and the foreclosures are gone.  Short sales are now just 10% of the market.  Very few people are moving up because they still carry the bruises of the past six years.  Lots and lots of buyers, no sellers.
Do you follow that?
Let me show numbers from the Denver MLS:
Number of homes FOR SALE April 2011:  17,707
Number of homes FOR SALE April 2012:  10,325
Number of homes UNDER CONTRACT April 2011:  5,768
Number of homes UNDER CONTRACT April 2012:  8,374
One year ago, there were 3.44 homes on the market to each one under contract. Today, there are 1.20 homes on the market to each one under contract.
I have used the word “stunning” repeatedly over the past several months to describe this shift taking place in our market.  If I had a stronger word to use, I would use it.  So I’ll just say again, this is STUNNING!
MSN Real Estate generated some buzz for Denver last week when it reported that the Denver housing market was the fastest recovering real estate market in the United States.  Based on what I’m seeing, I don’t dispute that for a second.
Remember that Colorado led the nation in foreclosures per capita in 2005 and 2006, while the rest of the country was still in party mode.  Guess what?  That first generation of foreclosed homeowners is now cycling back into the market, competing with all the first-time buyers and disillusioned renters who are all looking to lock in a low fixed payment (with rates in the 4's) for the next 30 years.
That's called foresight, not hindsight.
Recovery is here, and it’s now.  And it will be totally clear before long that buying real estate in 2012 was a prudent, well-timed moved for everyone with the courage to stop looking backward and start looking forward.
Posted by Dale Becker, RE/MAX Alliance at 11:02 AM

APRIL MARKET UPDATE – THE MIDDLE OF THE MARKET CATCHES FIRE

For all of the talk about the “sudden recovery” in the Denver housing market, the truth is that things began to improve noticeably all the way back in August of last year.  On September 15, 2011, I wrote a post on this blog entitled “Where Has the Inventory Gone?”  Seven months later, I long for the number of homes we had for sale back in September!
My April market report shows more of the same – falling inventory levels, increased demand and absorption rates that are dropping to unprecedented levels. 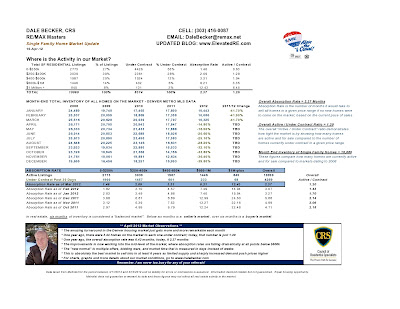 In real estate, sellers often track a statistic knows as “Days on Market”, which simply calculates how long (on average) homes stay on the market before a ready, willing and able buyer comes along. 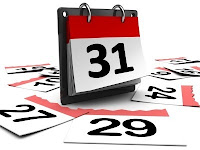 The new statistic to watch, however, is what I call “Days in Market”, which is the period of time it takes a buyer to find a home, write a contract and (yes) actually go under contract in a market where inventory is down by more than 40% and buyers are literally swarming over new listings.
I closed a transaction this morning with clients whom I first met 753 days ago (March 15, 2010, to be exact).   And while their case is extreme, there is no denying that it is taking buyers much longer to write successful contracts because of the lack of inventory and the intense competition.
I have other buyers right now I have been working with since January of 2012; December of 2011; October of 2011; and March of 2011.  I have had buyers drop out of the market this year after spending months pursuing limited inventory.  And I have had sellers who failed to successfully sell their homes in 2010 or 2011 find full price offers coming their way in days (not weeks or months) so far in 2012.
Demand changes the rules, and the rules in this market have changed.
The logical market is over.  If you see a home listed for $200,000, and the recent comps are $191,000, $193,000 and $194,500, you might find it “logical” to write an offer at $195,000 (or perhaps less).  Here’s the problem:  time and again, by the time you write that offer someone else has written one at $206,000.  Game over.
I do not advocate offering more for a home than it is worth.  And for years, I have built a very loyal clientele by injecting huge doses of logic, common sense and patience into the home buying process.  It’s simply too big a decision to get wrong.
But here’s the thing – the numbers always tell a story.  And the numbers in this market (more buyers than sellers, hardly any foreclosures, and interest rates in the 4’s) make the buying decision so obvious to people that it’s easy for buyers to write “over list” offers.
It’s okay to take your time.  It’s okay to be patient.  But when you see what you’re looking for at a price that isn’t crazy, you had better be prepared to strike fast.  Because as you read this, someone else is already writing that offer.
Posted by Dale Becker, RE/MAX Alliance at 8:50 PM